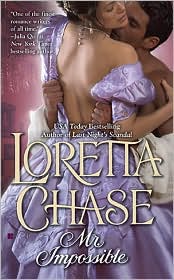 Description from the back of the book:

Impossible
Rupert Carsington, fourth son of the Earl of Hargate, is his aristocratic family’s favorite disaster. He is irresistibly handsome, shockingly masculine, and irretrievably reckless, and wherever he goes, trouble follows. Still, Rupert’s never met an entanglement–emotional or other–he couldn’t escape. Until now.

Outrageous
Now he’s in Egypt, stranded in the depths of Cairo’s most infamous prison, and his only way out is accepting a beautiful widow’s dangerous proposal. Scholar Daphne Pembroke wants him to rescue her brother, who’s been kidnapped by a rival seeking a fabled treasure. Their partnership is strictly business: She’ll provide the brains, he, the brawn. Simple enough in theory.

Inevitable
Blame it on the sun or the blazing desert heat, but as tensions flare and inhibitions melt, the most disciplined of women and the most reckless of men are about to clash in the most impossibly irresistible way.

This seems to be my month of reading historicals set in foreign lands other than the UK.  Not complaining, mind you.  This one is good….real good.

Set in Egypt the tale takes us in the hot, sandy desert and inside tombs and pyramids.   Our heroine, Daphne, is going all out to rescue her brother,Miles, and initially she thinks she is being helped by an ignorant buffoon, Rupert.  But when the chips are down the “buffoon” turns out to be quite intelligent and truly an asset in taking care of the bad guys.  There are plenty of bad guys.  Along the way disregard turns into love.

Chase has a good grasp of plotting.  She builds the relationship at a believable pace.  She brings alive the early 19th century Egypt.  She illuminates the English customs and sensibilities of the times when thrown into the strange and dangerous country that was Egypt, which held totally different customs.

I am particularly fond of books that enlighten me about another country or era.  This one is tops in that regard.  I even felt that perhaps things have not changed all that much since the early 19th century in Egypt.  It was dangerous then, and it is dangerous now.  It does make me long to see the pyramids and tombs but I certainly don’t want the adventure Daphne encountered.  I likened an earlier book I reviewed to an “Indiana Jones” flick, this one also reminds me of the fast paced adventure.

This is book 2 of Chase’s Carsington Series,  it is a stand alone read but it does make me want to read the others in the series.

Book 4- Not Quite a Lady