YAY! It is finally here!  Well almost here.  Next Tuesday it will be here.  DUNCAN is the 5th book in D.B. Reynolds’ Vampires in America Series.  I am a huge fan of this series and I encourage all of you who think you don’t like vampire stories to read this series.  It is chock-a-block full of romance, action and adventure.  There are good guys and bad guys and it is definitely a can’t-put-it-down read.

D.B.’s vampires are not your sparkly kind.  They are dangerous, sometimes violent but always so-o-o-o sexy.  Each book follows a vampire lord and his followers as they try to maintain their vampire society in the midst of humans.  Each Lord rules a section of America.  There are political maneuverings and sometimes war amongst themselves or some criminal elements.

RAPHAEL (Book 1 Vampires In America Series) is available on Amazon.com here:  http://tinyurl.com/cuvbxhr   (the Kindle edition is only $2.99- a steal) I guarantee that once you read RAPHAEL you will want to read the entire series. 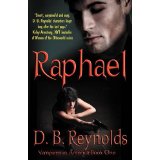 Now for the latest book in the Series:

Washington, D.C. … capital of an empire. Powerful. Exhilarating. Corrupt. And in the shadows … vampires far older than the nation itself.

A power unto himself, Duncan has served at Raphael’s side for nearly the entire two hundred years of his existence. But long laid plans have finally borne fruit, and the time has come for Duncan to leave Raphael and tackle the greatest challenge of his life. He will face treacherous vampires and murderous humans. He will rock the halls of human power if necessary. But Washington, D.C. will be his.

Emma Duquet cares nothing for vampire politics. She just wants to find her missing roommate and best friend, Lacey. But Lacey’s been playing with vampires of a particularly dangerous kind, and Emma will have to deal with the new vampire in town if she’s going to find her friend.

Battling powerful enemies who will stop at nothing to keep their secrets, Duncan and Emma will dig beneath the corruption and depravity that is Washington, D.C. and uncover the most heinous conspiracy of all …

Book #1- RAPHAEL- (from my amazon .com review)” I read this book, reread it, and think it may get read again when I go through those desperate-for-a-good-read times. Reynolds delivers in RAPHAEL on all of those points that I look for in a vampire romance; a bad boy vamp, a strong heroine, sizzling sex, a plot that is actually a plot, interesting side characters, facinating back story.”

Book #2- JABRIL- (from my Amazon.com review) “This follow up to Reynolds’ “Raphael” does not disappoint. We are treated once again to tough, beautiful P.I. Cynthia Leighton and to die for vampire, Raphael. Cyn is on the outs with Raphael and takes an offer from an evil Texas vampire lord, Jabril, to find his missing ward. The action rockets from Texas to California and back to Arizona in this fast read. I couldn’t put it down. The love scenes between Cyn and Raphael sizzle (yes they kiss and make up in one of the best written declarations of love ever written in a romance novel). ”

Book #3- RAJMUND- (from my Amazon.com review) “D. B. Reynolds writes such delicious bad boys. They are truly bad not sparkly but they are also the kind of guy you want covering your back in a tough situation. Her prose is such that the world of these vampires is vivid, so vivid that you can see the environment and feel the dark. The romance is tortured and long time developing and oh so sexy. There is mystery, action, suspense, sleazy characters to contend with, did I mention romance and sex? Another winner in the Vampires In America series.”