Review- The Stranger I Married by Sylvia Day

Title:  The Stranger I Married 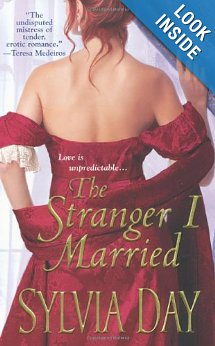 Description from back of book: Lady Pelham could not have designed a husband more suited to her needs. The Marquess of Grayson is a dear and enchanting friend and an unrepentant ladies’ man. Their union is solid; their hearts safe from one another. But every marriage has its surprises…

They were together for all the wrong reasons…

They are London’s most scandalous couple. Isabel, Lady Pelham, and Gerard Faulkner, Marquess of Grayson, are well matched in all things–their lusty appetites, constant paramours, wicked wits, provocative reputations, and their absolute refusal ever to ruin their marriage of convenience by falling in love with one another. Isabel knows such a charming rake will never appeal to her guarded heart, nor will she sway his philandering one. It is a most agreeable sham…until a shocking turn of events sends Gerard from her side.

Now, four years later, Gerard has come home to Isabel. But the carefree, boyish rogue who left has been replaced by a brooding, powerful, irresistible man who is determined to seduce his way into her affections. Gone is the devil-may-care companion who shared her friendship and nothing more, and in his place is temptation itself…a husband who desires Isabel body and soul and who will stop at nothing to win her love. No, this is not at all the man she had married. But he is the man who might finally steal her heart…

Lady Pelham and Gerard, the Marquess of Grayson, have a marriage of convenience.  They are both  libertines and she is tired of having her lovers wanting to marry her and he is tired of  every debutant wanting to marry him because his heart already belongs to a married woman who is carrying his child.  They agree to have a sham marriage and each go their own way.  But a twist of fate sends Gerard off and away from Isabel for four years.  When he comes home he is smitten with his wife and needs to convince her to make this a marriage for real.

This is a very sexy, read.  Not only are we entertained by Isabel and Gerard but also Isabel’s brother Lord Trenton has his own seduction story.  Sylvia Day writes superbly constructed plots along with sizzling sensuality and wit.

A conversation between Isabel and Gerard (possible spoiler):

“Do you find any oddness in our sudden fascination with one another?” she asked in a tone that begged for reassurance.

“Is it so sudden? I cannot seem to remember a time when I did not think you were perfect for me.” (Gerard)

“Yes you did or you would not have wed me.” He nuzzled his mouth against hers.  “But you did not think I was perfect for loving, which I was.”

“We really need to work on building your selfconfidence.” She whispered.

7 responses to “Review- The Stranger I Married by Sylvia Day”