Title: The Temporary Wife/The Promise of Spring (two novels in one volume) 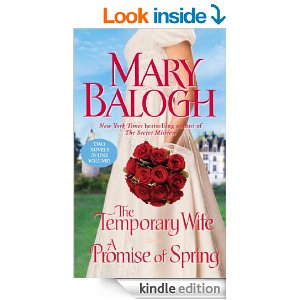 Miss Charity Duncan has no illusions about Lord Anthony Earheart’s proposal. The arrogant aristocrat has made it painfully clear what he wants: a wife who will enrage the father he despises and then disappear from his life. In exchange, Charity’s family will receive the money they desperately need. But after Charity agrees to this mockery of matrimony, she soon discovers a startling fact: She has fallen for Anthony, and breaking their marriage vows may also break her heart.

Grab a hold of the tissue box, this is a very emotional novel as only the inimitable Ms. Balogh can deliver. We are handed a marriage of convenience between a damaged Rake and a down on her luck governess. Throw in a belligerent Duke and a frosty homecoming and we have Balogh at her finest. Originally published in 1997 it is one of my favorite books by this author. When we are first introduced to Anthony we don’t like him very much. He is beyond haughty arrogance, bitter and wreaks of anger. On the other hand Charity is very likable right from the start with her intelligence, wit and sunny disposition. She also knows what will save her family from poverty. The story of love unfolds in spite of the efforts by the H/h to hold it at bay. This is a dream of a book and I definitely recommend it for all romantics.

A PROMISE OF SPRING

Grace Howard has every reason to be devoted to Sir Peregrine Lampman. After all, the gallant gentleman rescued her from poverty by making her his bride. Even more nobly, he did not withdraw his affection after she confessed to a youthful folly that had compromised her virtue. But Grace did not tell the whole truth about the handsome lord who betrayed her—and now the one thing she’s kept from Perry threatens to destroy her last chance at true love.

Grace is fond of Perry, perhaps she even loves him. Perry is all that is charming, amiable and easy going. He loves Grace. Maybe not at first but it didn’t take him long. Why then is Grace even giving Lord Sander-whoever the time of day? I was so annoyed with Grace’s dilly-dally, maybe yes-maybe no, that it took some of the enjoyment from this book that had a good premise and Mary Balogh’s signature character development. Perry was such a paragon of all that was good, understanding and sensible that I just wanted him to sit Grace down and tell her to quit her wishy-washy complaining. This is an older woman younger man romance but Grace tried her best to destroy their relationship over and over by her thinking she was too old for Perry. So, no, I wasn’t thrilled with this book, but I can’t say it wasn’t well written and delivered on plot points.