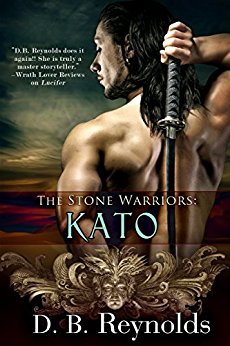 It was a time when gods walked the earth, when armies fought not for bits of land, but for the very existence of humanity. On such a battlefield, five formidable warriors stood against an evil greater than any the earth had ever seen. But evil is not an honorable foe. Betrayed by someone they trusted, the warriors were cursed, one by one, tossed into the maelstrom of time, imprisoned in stone, their freedom resting on nearly impossible conditions. Until . . .

Kato Amadi . . . born of darkest sorcery, unstoppable on the battlefield, his magic is as deadly as his blade. But not even magic could save him from vicious betrayal. Trapped for millennia in darkness and silence, he is freed at last, only to find himself in the middle of a battle against the very beasts of hell he was created to destroy.

Grace Van Allen is a scholar of ancient languages who toils in the dim recesses of a museum basement with only a beautiful stone warrior to keep her company. But when Grace calls upon her silent warrior to help her translate an obscure new language, she breaks the ancient curse holding him prisoner . . . and frees three deadly demons to rampage through her city.

Tracking demons is what Kato was born to do, but he’ll need Grace’s help. And when they discover that Kato’s enemy is still alive and still plotting against him, their hunt takes a dangerous turn, one that might just prove fatal for both of them . . .

Hold on to your bloomers, the studliness of Warrior Kato is going to melt them right off. Grace can’t resist him so how are we supposed to resist, and who would want to? If we have to go up against deadly blood-dripping demons I want this guy covering for me. We also get to see Nick, Damien and Cassey from book one but this is truly Kato’s show. Grace who works at the museum at first appears rather sedate but as the story unfolds we are treated to Grace the female warrior. Here’s a hint, she falls for Kato just as much as the reader but she gets dessert and we get to sigh. There are lots of bloody battles fought, so be forewarned. There is magic in this book both Dark and Light and I am once again totally in love with Nick. I did want more of Ryan the mathematician because that was a bit of a mystery not completely resolved. (perhaps D.B. will treat us to more of him in future books).

Here’s a riddle for you; what’s hotter than a summer heat wave? I thought you would be way ahead of me on this one. Correct, this absolutely mind bending, mind boggling, vicious, sexy down right dirty, delightful novel from Ms. Reynolds. This is number two in her Stone warriors series and she has once again come through with an original plot that kept me riveted. You can start with this book since there is sufficient back-story incorporated and you won’t be lost but reading the first book , the Stone Warriors: Damien, along with this one will make it more enjoyable. Then like me you will wait impatiently for the next in the series, The Stone warriors: Gabriel, to which we are given a peek at the end of this book.