Advance Review- Not The Duke’s Darling by Elizabeth Hoyt 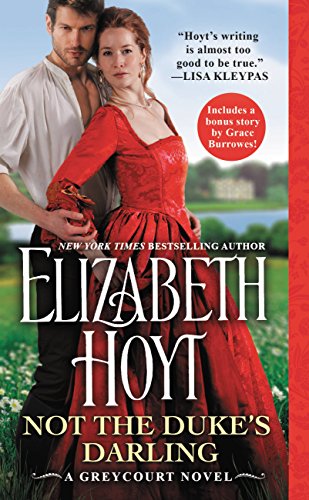 Source: Free for review from the publisher

Violence Rating: 5
Description from Amazon.com:
Freya de Moray is many things: a member of the secret order of Wise Women, the daughter of disgraced nobility, and a chaperone living under an assumed name. What she is not is forgiving. So when the Duke of Harlowe, the man who destroyed her brother and led to the downfall of her family, appears at the country house party she’s attending, she does what any Wise Woman would do: she starts planning her revenge.

Christopher Renshaw, the Duke of Harlowe, is being blackmailed. Intent on keeping his secrets safe, he agrees to attend a house party where he will put an end to this coercion once and for all. Until he recognizes Freya, masquerading among the party revelers, and realizes his troubles have just begun. Freya knows all about his sins-sins he’d much rather forget. But she’s also fiery, bold, and sensuous-a temptation he can’t resist. When it becomes clear Freya is in grave danger, he’ll risk everything to keep her safe. But first, he will have to earn Freya’s trust…by whatever means necessary.

**
This book gave me head-scratching moments. I just found myself confused about Freya, Wise Women and the Duke’s blackmailer. Like many readers I don’t like “info dumps”, especially in first books of a new series and I’m sure Ms. Hoyt knows that and avoids it, but we are left in the dark for long periods and I would have welcomed some more information about the mystery of Aurelia’s death and also other issues. Coincidences abound, Freya jumps into the Duke’s carriage while out-running bad guys in London and then they are both at the same house party along with another person from their past.

Even though Ms. Hoyt writes well I can’t give this book more than 3-stars. I will read the next in the series because this is a terrific author and I think future books will be better.