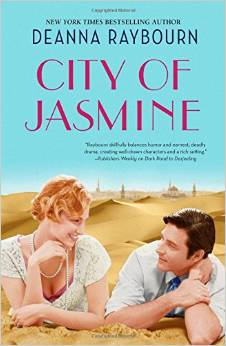 Source: Free for review from the Amazon Vine Program

Famed aviatrix Evangeline Starke never expected to see her husband, adventurer Gabriel Starke, ever again. They had been a golden couple, enjoying a whirlwind courtship amid the backdrop of a glittering social set in prewar(WWI) London until his sudden death with the sinking of the Lusitania. Five years later, beginning to embrace life again, Evie embarks upon a flight around the world, collecting fame and admirers along the way. In the midst of her triumphant tour, she is shocked to receive a mysterious—and recent—photograph of Gabriel, which brings her ambitious stunt to a screeching halt.

With her eccentric aunt Dove in tow, Evie tracks the source of the photo to the ancient City of Jasmine, Damascus. There she discovers that nothing is as it seems. Danger lurks at every turn, and at stake is a priceless relic, an artifact once lost to time and so valuable that criminals will stop at nothing to acquire it—even murder. Leaving the jewelled city behind, Evie sets off across the punishing sands of the desert to unearth the truth of Gabriel’s disappearance and retrieve a relic straight from the pages of history.

Along the way, Evie must come to terms with the deception that parted her from Gabriel and the passion that will change her destiny forever….

Deanna Raybourn, known for her Victorian mystery series of Lady Julia Gray, has penned a tale that is infused with the feeling of the rip-roaring twenties, nineteen twenties that is. It was a time when women were emerging from the confining roles of the Victorian/Edwardian era and daring to throw themselves into independence and adventure. Such a woman is Evie Starke. She was devastated by the demise of her brief marriage and to overcome she takes on the role of a twenties daredevil and independent woman. Tagging along is her elderly aunt Dove who reminds the reader of Green’s Auntie Mame. As in other Raybourn books there is considerable mention of archeology and the story revolves around an ancient artifact. Gabriel is an enigma for much of the book but there are surprises and twists in the story that I never saw coming. In spite of the fact that our hero and heroine are bickering throughout most of the book, this is a very romantic story. It is romantic in its Indiana Jones type of desert setting, its fondness for the kickass, independent woman and the romance of the desert warrior.  The book rarely slows down leading the reader through one adventure and action filled scene to the next. I highly recommend this book to those who like their romance infused with daring-do.