Tag Archives: Rogue With A Brogue

Advance Release review- Rogue With A Broque by Suzanne Enoch

Title:  Rogue With A Brogue(Scandalous Highlanders #2) 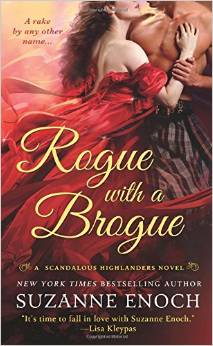 Source: Free For review from the publisher

A ROGUE FOR EVERY LADY

London, 1817: Stuck in a Mayfair ballroom thanks to his lovestruck brother, highlander Arran MacLawry wants nothing but a bit of distraction from an arranged betrothal—and a clever auburn-haired lass in a vixen’s mask promises just that…until he discovers that she’s the granddaughter of the Campbell, chief of clan MacLawry’s longtime rival. Despite their families’ grudging truce, falling for fiery Mary Campbell is a notion too outlandish even for this Highlander…

THE THRILL OF THE FORBIDDEN

Raised on tales of savage MacLawrys, Mary is stunned to realize the impressively strapping man in the fox’s mask is one of them. Surely the enemy shouldn’t have such a broad chest, and such a seductive brogue? Not that her curiosity matters—any dalliance between them is strictly forbidden, and she’s promised to another. But with the crackling spark between them ready to ignite, love is worth every risk…in Rogue with a Brogue by Suzanne Enoch

This, the second book in the Scandalous Highlanders Series is a romantic gem. Ms Enoch can spin a tale of star-crossed lovers that brings to mind the Hatfields and the McCoys as well as Romeo and Juliet. The feud between the MacLawry Clan and The Campbell Clan is many generations old and no one can quite remember how it started. There is plenty of action, a few laughs, steamy love secenes and true love. The characters are so well drawn that we feel as if they are real. This is a standalone novel in this series. This is the story of Arran MacLawry and I can’t wait to read his brother Ranulf’s story in The Devil Wears Kilts. As usual I’m reading out of order but it doesn’t seem to matter with this series.

I highly recommend this book to all my fellow romance lovers.